NOTICE: Due to the Coronavirus the Lodge will be closed immediately. This will protect guests and my family. When the danger of community spread is over, we will re-open. Thank you. LaVerne Tromble

History of the Lodge

Angel Suite patio in the garden

Entrance towards the gym

Spiral staircase from the atrium

Looking down the spiral staircase (don't worry, this is not the only way upstairs)

Breakfast bar in the atrium

Outdoor kitchen (next to the lower patio)

Outdoor kitchen (next to the lower patio)

Private drive to the Kokopelli and Zia suites

The lodge soaking up the sinking New Mexico sun

View from the lower patio looking over the Las Cruces Valley, towards the Organ Mountains

Sunset over the Organ Mountains

Upper patio looking towards the mountains

Upper patio looking towards the street

View from the Lodge (looking East)

View of the Organ Mountains lit up by the setting sun

View over the lower patio

View to the North of Picacho Peak

View of Picacho Peak from the Bridal Suite balcony

Trail along the pine berm

Walking trail that goes through the pine tree berm

Nature trails for walking and hiking, right outside your door

Nature trails around the lodge

Honestly, it doesn't  snow much in Las Cruces - but sometimes we do have white winters!

Lodge on the Desert

A Lodge on the Desert is located high on a hill on the West mesa of Las Cruces, New Mexico. There are two-hundred mile daytime views that capture the Franklin Mountains, A-Mountain, Sacramento Range, The Organ Peaks, Robledos, and Picacho Peak.

As sunset reddens the western sky, and twilight settles over the city, the city lights begin to glow and twinkle.

The Lodge is surrounded by 26 acres of vacant desert. Further west, some 200 acres are vacant. The sparse population makes for a peaceful setting. The city and mountain views create spectacular backdrops for walking, hiking or lazy times in a comfy chair. Nature trails are right outside your door.

Stonewalls, adobe walls and wrought iron completely enclose the Lodge. A dawn to dusk lighting system adds to the security and lights up the way for nighttime enjoyment of the patios and garden.

The Lodge is Powered by Solar Energy 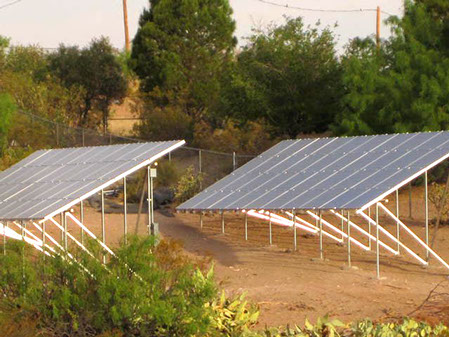 Lodge on the Desert is owned and operated by LaVerne and Calvin. LaVerne is an Illinois native and Calvin is from New Mexico. They met  when Calvin contracted the construction company LaVerne owned to build him a home in Las Cruces. Long story short, they have been happily married ever since and run the B & B together (which is also the location where they got married).

History of  the Lodge

The original residence was built in 1965 by Mrs. Jimmie Bush and her daughter. According to olde timers, these two women single handedly set all the big beams and tiny tiles. It is said that Mrs. Bush and another lady were competing to build the biggest house in the area.

This race for space was decided when Woodward Lumber stated that Mrs. Bush had purchased the most sheetrock. When completed, it sat, truly isolated, in the middle of the desert and was the largest residence in Doña Ana County.

The house sold to Paul Randolph, an NMSU math instructor. His wife Dorothy gave private music lessons at the residence. The present owner, LaVerne Tromble, bought the house from Paul Randolph in 1974. Mrs. Tromble remodeled and doubled the size. In 1996 she opened this showplace to the public as a Bed and Breakfast and as a venue for private functions. The Lodge has become a very popular place for weddings, receptions, parties and business functions. 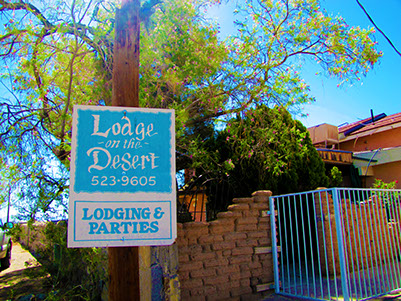 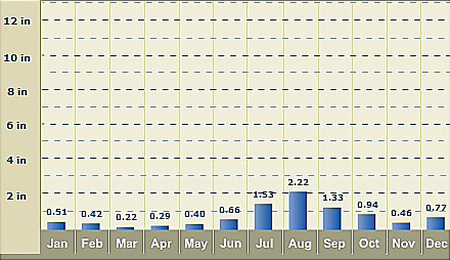 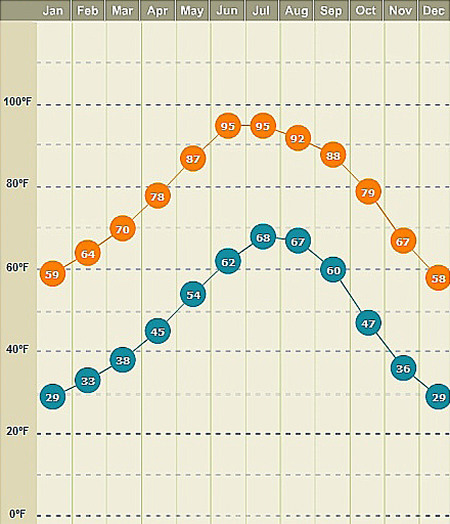 Las Cruces was founded in 1849 in the Mesilla Valley of New Mexico. The area had long been occupied by Native American groups, Spanish explorers, and Mexican colonists. Over the years, wars and international treaties have changed control of the area several times, to Spain, Mexico, the United States, and the Confederacy.

The following stories are excerpts from the Las Cruces Convention and Visitor’s Bureau. To read more about these stories visit:

According to geologists, southern New Mexico was covered by a great inland sea 600 million years-ago. When the sea retreated, many fossils were left behind. In the late 1980s, a local paleontologist discovered what the Smithsonian Institute has called, “the world’s best-fossilized footprints from the Permian Period.”

Four hundred years ago, Don Juan de Oñate made his historic trek into what is now New Mexico in search of gold. But before Oñate, this area was inhabited by the ancient culture of the Mogollon Indians. Their life is depicted in the many petroglyphs (rock drawings) that remain scattered throughout the area.

By 1848, the Mexican War with the United States had ended with the signing of the Treaty of Guadalupe Hidalgo. That treaty, among other things, converted Doña Ana from Mexican to United States territory. Many settlers headed for the area, trying to claim rights to the undeeded land just acquired by the treaty. Using rugged equipment, Las Cruces, at least in concept, was born.

Birth of the Plaza and Church

A block of land was designated for the plaza and church and 84 city blocks were laid out, each containing four lots of land. Once the town site was completed, the 120 people living on the platted land drew numbers from a hat for their new home sites.

United States Army Lt. Delos Bennett Sackett was tasked with mapping out an area for a town. After home sites were identified and people began building, it became clear that despite his best laid plans, Sackett had platted a town with crooked streets and houses that crowded against each other. Furthermore, since mud was the primary building material, people began digging holes in the streets to make adobe blocks for their houses. It became such a problem that the Judge ordered townspeople to stop making adobes on Main Street and to fill in the holes. 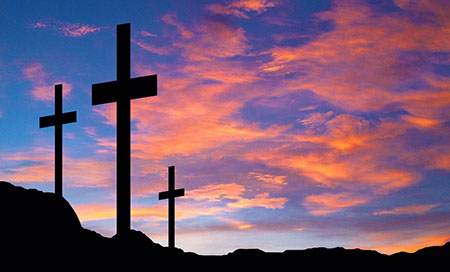 How Las Cruces (City of “The Crosses”) Got the Name

There are multiple theories as to how Las Cruces got its name. One theory suggests that sometime during the 18th Century, a bishop, a priest, a Mexican Army colonel, a captain, four trappers and four choir boys were attacked near the Rio Grande and only one – a boy – survived. Crosses were erected in their honor, and the name, El Pueblo del Jardin de Las Cruces, (the City of the Garden of Crosses,) evolved.

Other stories say multiple crosses were erected in the area to mark the grave sites of the many victims of Apache raids. Still another story is that a group of 40 travelers from Taos, NM were killed just as they reached Las Cruces. But some people feel that the name is simply the Spanish translation for “crossing” or “crossroads.”

Las Cruces has been the haunt of many notable figures, such as Geronimo, Victorio, Albert Fall and the discoverer of Pluto, the late Clyde Tombaugh. But none have garnered more attention than the most infamous outlaw in the West, William H. Bonney, a.k.a., Billy the Kid. In 1880, Billy the Kid stood trial in a Mesilla, NM courtroom for the murder of Andrew “Buckshot” Roberts. He was found guilty and sentenced to hang by Judge Warren Bristol. During his sentencing, Judge Bristol told Billy he was to be hung “until you are dead, dead, dead!” Legend has it that Billy shouted back, “And you can go to hell, hell, hell!” He was taken to Lincoln, NM where he escaped while awaiting execution. He was later shot and killed by Lincoln County Sheriff Pat Garrett in 1881. The building in Mesilla that housed the jail and courtroom are still standing and the iron jail cell that held him is on display across the street in the Gadsden Museum. Another historical landmark still standing in Mesilla is the old Butterfield Stage Depot. Today it is home to La Posta, a restaurant with a worldwide reputation for its Mexican food.

A Lodge on the Desert 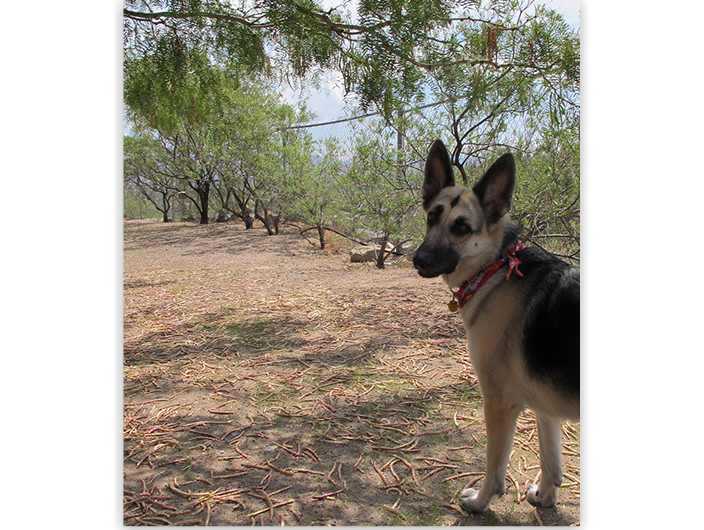